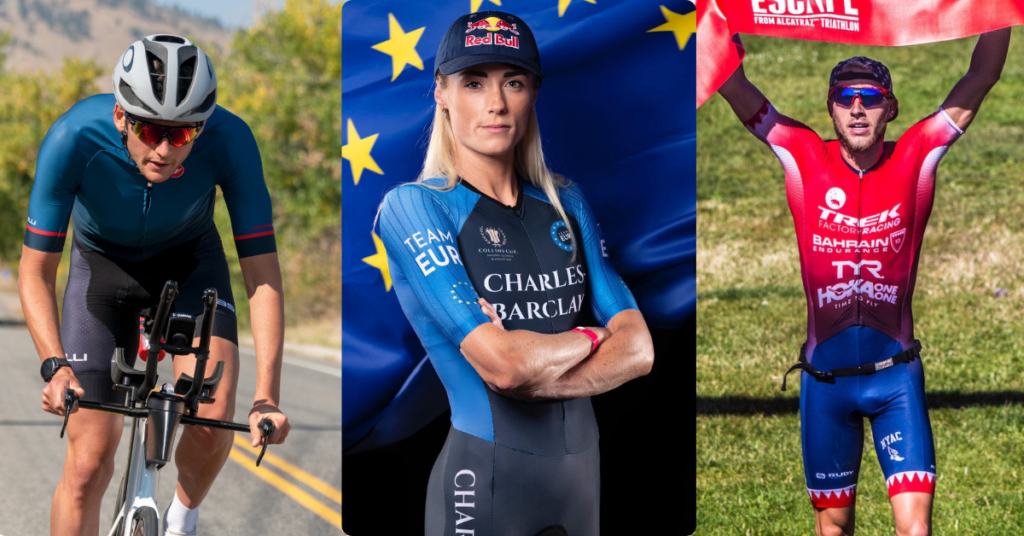 The much anticipated Collins Cup will take place Saturday in Samorin, Slovakia. This innovative format was designed around the Ryder Cup competition. The world’s best Pro Triathletes will be competing for an advertised total of $1,500,000. The race design features elite teams of six men and six women representing the United States, Europe and Internationals. The Pro Triathletes will compete in head-to-head-to-head matchups. Each heat will commence every 10 minutes and will include a total of three competitors with one representative from each team – U.S., Europe and Internationals. They will cover a course that’s slightly shorter than the standard 70.3 distance – 2 kilometers swim, 80 kilometers bike and 18 kilometers run.

Meet the Pro Triathlon Training Instructors Who are Competing

Ben Kanute became interested in triathlon after watching his dad race when he was just seven years old.

“At the age of seven. I stood at the shore of Lower Wacker Drive in Chicago watching my father participate in his first triathlon, knowing that one day that had to be me.”

He competed on USA Triathlon’s youth elite and junior elite circuits, winning one National title as a youth elite and two as a junior elite. He attended the University of Arizona and competed on the club triathlon team – winning both the sprint and olympic distance titles at then 2013 USA Triathlon Collegiate National Championships. Ben earned his first ITU Triathlon World Cup medal in 2014 and was part of the 2016 U.S. Olympic Team, where later he placed 29th at the Olympic games in Rio De Janero. In 2017 at the IRONMAN 70.3 World Championships, he placed 2nd and continues to eye the longer distance races. He continues to enjoy triathlon because it allows him to be outdoors and test the limits of his body.

At just 25 years old, Lucy Charles-Barclay, broke the 19 year old Kona IRONMAN World Championship swim course record with a time of 48:13, and holds the second fastest time ever done in Kona with a time of 8:36.34.

With her aggressive ‘off the front” racing style, and by re-establishing swim course records at nearly every race she’s participated in, Lucy has put the tri world on notice that she is undoubtedly the future of the sport.

After so much success this early in her career, Lucy has her sights firmly set on becoming the fastest triathlete ever, and ROKA is excited to contribute to her future achievements by offering the fastest and most technologically advanced swim equipment on the planet.

Justin Metzler, AKA BIGMETZ, is an IRONMAN and 70.3 Professional Triathlete. Despite being one of the youngest on the circuit, Justin has extensive triathlon experience starting from his very first race at the age of 13. He progressed through the ranks rapidly and established himself as one of the premier half distance racers in the United States. He wasted no time making a name for himself with a  breakthrough in his 2014 season, earning him the USA Triathlon Rookie of the Year. He continues to hone his craft, racing around the globe in search of experience and development. In the process, he has gathered 30+ top 5 finishes and is well known for his consistency and passion on and off the race course.

Triathlon is not only a profession, it is a way of life that he has been enthusiastically pursuing for over a decade. He aims to inspire others to pursue their passions and live a fulfilling life by being a positive role model to aspiring triathletes through mentorship and coaching. He is committed to remaining highly competitive in 70.3 distances while transitioning to full IRONMAN events in the future.

How to Watch the Collins Cup Triathlon

CHECK OUT THEIR ONLINE TRIATHLON COURSES

Pro Triathlon Training is led by elite triathlete, Gerard Hubbard. Our mission is to inform, educate, and motivate new and experienced athletes. Through our relationships with the best athletes and coaches in the sport we hope to build and maintain the excitement this great sport is famous for.